Hutton Parker Foundation is pleased to announce the re-opening of the Hill-Carrillo Adobe and its community meeting space located at 11 East Carrillo Street, Santa Barbara.  Effective September 7, 2021, the Hill-Carrillo Boardroom will again be available for use by local area nonprofit organizations.

This historic building has hosted community gatherings and meetings since its original construction in 1826.  Newly restored, the Hill-Carrillo Boardroom can be reserved for meetings, lectures, education opportunities and the like exclusively for 501(c)(3), nonprofit organizations.

An easy to use online scheduling system has been adopted to streamline the reservation process. To become an approved “User” and gain access to the reservation system please contact Ingrid Biancone, Office Manager at  for further instructions. 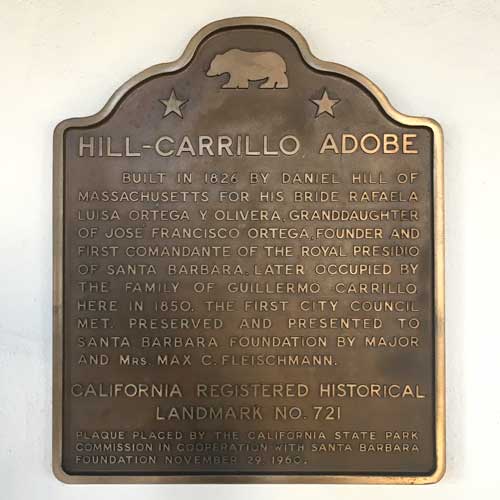 Few buildings in Santa Barbara have had a longer or more storied history than the Hill-Carrillo adobe at 11-15 East Carrillo Street.  Down through the decades this adobe has been linked to some of our community’s most prominent and important citizens and families, has served as an artistic and cultural center, and has been home to major philanthropic organizations which have done so much to enhance the vibrancy of community life.

Daniel Hill, a Massachusetts native, was one of the first American citizens to call the South Coast home.  Hill arrived aboard a merchant ship in 1823, determined to stay, and soon was active in the local mercantile and building trades.  In 1825, he married Rafaela Luisa Ortega, a granddaughter of José Francisco Ortega, who had served as the first comandante of the Spanish Royal Presidio of Santa Barbara in 1782.

In 1826, the newlyweds moved into their new Santa Barbara home.  The adobe was one of the first buildings in the pueblo to have wooden floors, as opposed to floors of packed earth, which was the norm for the period.  The house also boasted glass windows which Hill had imported from Boston.  In short, the residence was one of the finest in Santa Barbara.

One occurrence of note took place in 1833 with the birth of the daughter of Thomas Larkin and Rachel Holmes in the adobe; the first child of full American parentage to be born in Santa Barbara.

Soon after the Hills moved to a ranch just up the coast from Santa Barbara, eventually settling on the Rancho La Goleta where Hill built his final adobe home.  Today the Daniel Hill adobe in Goleta is a designated Santa Barbara County Landmark.

Upon the Hills’ departure, their Santa Barbara adobe was sold to John Wilson, a trader in furs.  He and his wife, Ramona Carrillo Pacheco, turned their home into one of the outstanding social centers in the city.  Ramona was a widow, whose son by her first marriage, Romualdo Pacheco, became the first and only California State Governor of Hispanic descent.  This began the adobe’s connection with the Carrillos, one of the great grandee families of early California whose members were instrumental in the early government of Santa Barbara.  The first meeting of the Common Council (forerunner of the City Council) met in the adobe.  A number of Carrillo family members called the adobe home, including Guillermo Carrillo, who served as mayor beginning in 1858.

The adobe was put to a variety of uses around the turn of the twentieth century.  For a time, it housed a Chinese laundry and a Chinese school.  At the western end of the adobe was the office of dentist Dr. Lorenzo Yates, a horticulturist and a pioneering naturalist of the Santa Barbara area and the Channel Islands.

By the early 1900s the adobe was not in the best of condition.  Esther Fiske Hammond of Montecito purchased the property in 1916 restoring and refurbishing the adobe and remodeling the grounds.  Hammond had two wings added using plans furnished by Robert Wilson Hyde, who had his studio there for a time.  Hyde was a notable arts and crafts artisan, especially known for his beautiful medieval-style illuminations of books.  The adobe became an important arts and cultural center for the city, utilized for musicales and dramatic readings.  Portions of the adobe housed a book shop, an antiques store and a tea room.

In 1928 the adobe was threatened by possible destruction when plans were announced for construction of a movie theater on the site.  It was at this point that Max Fleischmann, an heir to the fabulous Fleischmann’s Yeast fortune stepped in.  A Montecito resident since 1920, Fleischmann bought the Hill-Carrillo adobe to ensure its preservation.  That same year he became a founder and primary benefactor of the philanthropic Santa Barbara Foundation and two years later he deeded the adobe property over to the Foundation.

The adobe served as the headquarters of the Santa Barbara Foundation until 2010, when it was purchased by Hutton Parker Foundation.  In the ensuing years portions of the adobe were leased as office space as well as serving as complimentary meeting space for local nonprofit organizations.  In the spring of 2019 Hutton Parker Foundation began a meticulous restoration of the facility.  The Hill-Carrillo adobe is listed on the National Register of Historic Places, is a California Historic Landmark and a City of Santa Barbara Landmark.